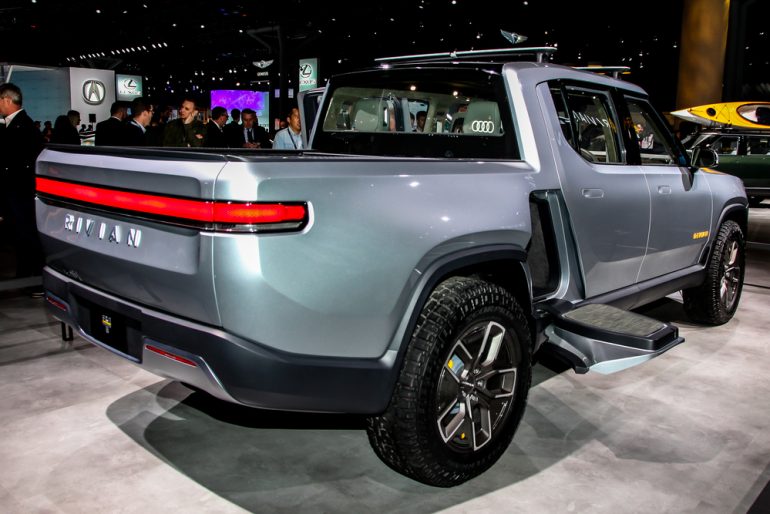 NEW YORK, NY, USA - APRIL 17, 2019: Rivian R1T Pickup truck is an all electric vehicle shown at the New York International Auto Show 2019, at the Jacob Javits Center. This was Press Preview Day One of NYIAS

The Rivian (NASDAQ: RIVN) stock price has been in a strong bearish trend in the past few months. The shares crashed to a low of $16.50, which was the lowest level on record. It has plunged by more than 84% since going public in 2021. In this article, we will explain the short case for Rivian and another electric vehicle (EV) stocks like Tesla, Lucid, and Mullen Automotive.

The future may not be electric after all

Rivian stock price became one of the most popular companies in the world. It is a leading EV manufacturer that focuses on trucks, pickups, and delivery vehicles. The firm is well-known for its relationship with Amazon, the biggest e-commerce and cloud computing company in the world. It has ordered over 100k vehicles from Rivian.

There are several reasons why a case to short Rivian stock can be made even as they remain at their lowest level on record. First, the future of vehicles is not electric at all. Recent happenings have made the case that the world will not become fully electric any time soon. For example, despite the hype, EVs have major flaws that will be hard to deal with.

One is that the current utility state in the US is not ready for EV. In December, the Tennesse Valley Authority (TVA) asked residents to lower their power usage due to cold weather. Other states like California and Texas have had major power issues in the past few months. Therefore, how can such a grid handle millions of EVs?

Cost of maintaining an EV

Second, the cost of maintaining a Rivian truck as it ages is enormous. For example, replacing the vehicles battery will cost you over $15,000. That is a price of an average used car. So, add to the fact that most EV cars cost significantly more than average vehicles. Rivian cars start at $70,000, which is above the average new car price of $48,000.

Third, Rivian manufactures trucks and SUVs. In most cases, buyers of these vehicles are usually interested in going off-road and long distances. Their advertised range is up to 316 miles per charge. However, the reality is that these cars don’t have all this range in real conditions. For example, they usually lose their charge at a faster pace in cold weather.

Further, charging these cars is usually a long period. On average, it takes more than a hour to get the EV to charge a Rivian vehicle. Filling gas takes less than 5 minutes. As such, it is difficult to imagine millions of people buying these vehicles.

Another reason to short Rivian stock price is its reliability. The company has already made three recalls and there is a possibility of more to come. Consumer Reports expect the cars to be less reliable than other EV companies.

Other reasons to short RIVN stock are its pricing challenge, large losses, and charging the car is more expensive. As Tesla has proven, EV prices are about to sink. Also, there is an issue of competition between EV companies and other global firms like Toyota and GM.

Turning to the daily chart, we see that the RIVN stock price has collapsed in the past few months. It has managed to move below the important support level at $19.32, the previous all-time low. The shares have moved below all moving averages while the Relative Strength Index (RSI) has moved to the oversold level. Therefore, I suspect that the shares will continue falling as sellers target the key support level at $10.