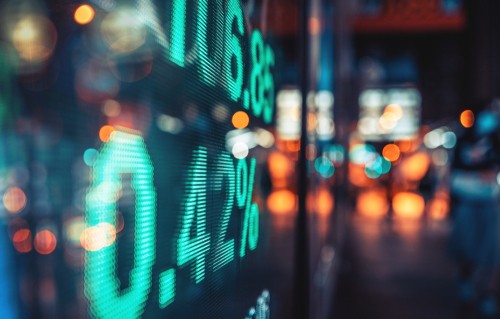 Global markets continue to rebound to the upside. The U.S. S&P 500 broad market index has already soared by more than 130 points from this Monday’s bottom to touch the 4,715-4,725 area before Wall Street’s close yesterday. It was then tested again during the morning futures trade on Tuesday, while major European indexes also gained for the second session in a row.

In an attempt to justify the price changes, financial markets news websites cite the less hawkish speech by the Federal Reserve (Fed) Chairman Jerome Powell during his testimony before the U.S. Senate Banking Committee, which approved his reappointment for a second term.

However, in reality, he only confirmed the Fed’s previous plans to begin normalising the monetary policy in 2022, which would involve “ending asset purchases in March, raising rates over the course of the year”, according to his own words. And “perhaps later this year, we will start to allow the balance sheet to run off,” he added.

Esperio considers that the most exciting part of his speech was the phrase concerning the start of interest rate hikes that could be interpreted in the context that this tightening process may probably not start in March, but later, maybe in June.

Some experts believe that the verbal formula used to let the economy know that the Fed’s balance sheet will roll off at some point is a better scenario than the one in which Powell pointedly calls it “selling bonds”, but isn’t that the same thing under another name?

Moreover, the market community may agree with the concept that the Fed will carry out all these actions but does not consider them too critical to spoil the anti-inflationary stock rally to avoid cash depreciation risks.

Consumer inflation figures in the United States seem to worry less about the market. But it may be the last remarkable endurance test for the overall market mood.

Financial reports from the banking sector include Citigroup, JP Morgan & Chase and Wells Fargo, the Bank of America, Goldman Sachs, Morgan Stanley, and others. However, it is unlikely that any figures or forecasts for the next half of the year are now able to undermine the leadership of these financial institutions as they were the main positive drivers during times of corrections of techs and value stocks in January.

Moreover, the influence of higher 10-year Treasury bond yields, which have hit 1.75-1.8% since the beginning of the year, remains comfortable for the banks as they are the most significant bondholders.

The energy sector is updating price records too, seeing that oil prices are not afraid of the Omicron variant influence and are rising to almost $85 per barrel of its Brent crude benchmark, as oil bulls feel the risk for demand fading.

Electric vehicles manufacturers are now more confident after the message that Tesla sold a record 70,847 thousand China-made vehicles in December, almost three times higher than a year earlier and 34% more than similar sales in November 2021.

As a result, Morgan Stanley analysts raised the target price of Tesla shares from $1,200 to $1,300. Many other tech shares have already recovered well in price since Monday’s lows, and this process may continue thanks to separate corporate news.

Meanwhile, even some representatives of the troubling sectors managed to send positive signals. On Tuesday, the number one U.S.

Air carrier, American Airlines Group, forecasted a smaller-than-expected fall in its Q4 revenue, down about 17%, compared with prior expectations of an about 20% fall.

Rapidly rising Omicron infections forced airlines to cancel many flights as pilots and cabin crew fell sick and were legally required to quarantine. In addition, mass cancellations over the Christmas and New Year periods and higher incentives for employees impacted carriers’ costs. Yet, fresh financial wounds may be less painful than generally anticipated.