The Amazon stock price will be in the spotlight this week after G7 countries finally agree to target big tech’s tax practices.

Online retail giant Amazon (NSDQ:AMZN), along with other multinational technology companies is about to be hit by a bigger tax bill.

The US Government has been pushing for Amazon to increase its federal tax contributions for some time now. Discussing his infrastructure plan in March, President Biden made his intentions very clear:

“A fireman, a teacher paying 22% — Amazon and 90 other major corporations paying zero in federal taxes? I’m going to put an end to that.”

The finance ministers of the G7 member states have given the President exactly what he asked for.

The collection, including the United Kingdom, France, Germany, Italy, Japan, Canada, and the United States, have agreed to tackle tax abuse by big tech companies.

Treasury Secretary Janet Yellen was asked specifically if both Amazon and Facebook would fall under the proposals. Yellen told reporters, “It will include large profitable firms, and those firms, I believe, will qualify by almost any definition.”

Amazon is one of many large US companies that benefits by directing profits to offices in tax havens. The threat of higher tax obligations will likely harm the Amazon stock price when trading opens tomorrow.

Using the weekly chart, we can see that AMZN has just pulled back from its all-time high at $3,554. This was only marginally higher than the previous $3,552.25 record, set in August 2020.

This has created a double-top formation on the chart and is now considered a strong resistance level.

If the Amazon stock price falls below this support level, it opens the door for a larger decline. The 100-day moving average at $2,574 would be a natural target. Coincidentally, this also lines up with the 50% retracement line from the March 2020 low to the recent all-time high.

If the stock trades above the previous high at $3,554, it will cancel the bearish outlook. 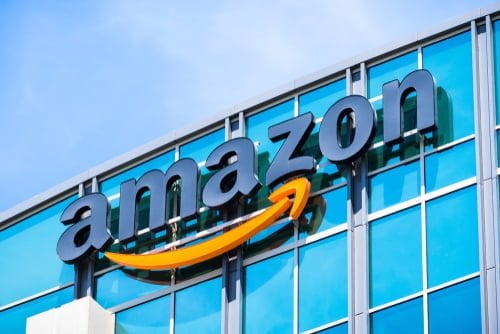 Amazon Share Price: A new All-Time High But It’s Tough At The Top

Amazon Price: A Drop Below $2900 Could Happen On “Hitler” Mustache Outcry