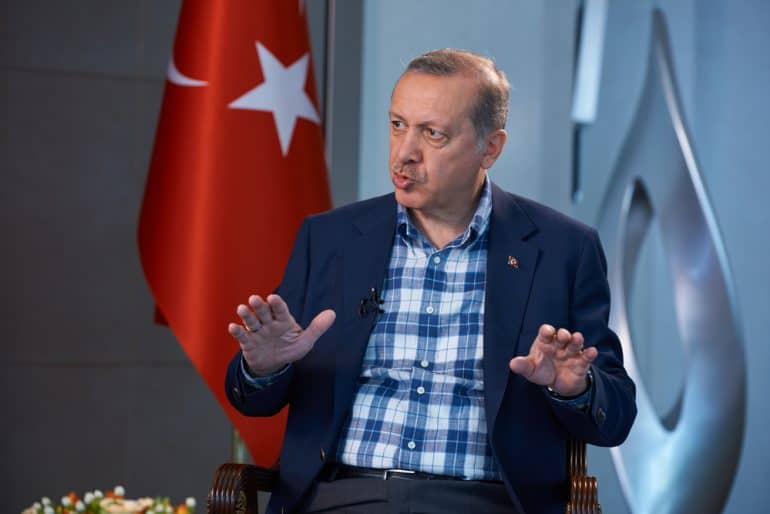 ISTANBUL,TURKEY/AUGUST 07,2016: President of Turkey Recep Tayyip Erdogan during an interview with Russian television

The USD/TRY spot exchange rate has been in a consolidation phase in the past few months. It is hovering near its all-time high of 19.31, which is much higher than where it was a few years ago. The pair was trading at less than 3 in 2014. In total, the Turkish lira has crashed by almost 400% in the past five years, making it the worst-performing major currency in the world. Similarly, the EUR/TRY and GBP/TRY have continued rising.

The USD/TRY exchange rate will have several drivers in 2023. First, the pair will react to the latest actions of the Federal Reserve and the Central Bank of the Republic of Turkey (CBRT). The two hanks have taken increasingly divergent paths in the past few months. In the United States, the Fed decided to hike interest rates by 400bps to fight soaring inflation. On the other hand, the CBRT decided to cut interest rates, which helped push inflation to above 80% in 2022.

The actions of the CBRT and Fed will have an impact on the USD/TRY forex rate. Analysts expect that this divergence will continue this year. They see the Fed hiking by 0.50% in February followed by one or more 0.25% increases in the next few months. On the other hand, the CBRT is expected to leave interest rates unchanged for a while as it assesses the impact of the recent cuts. Still, with an election coming up in June, further erratic behavior by the CBRT cannot be ruled out.

Liraization of the Turkish economy

The USD/TRY price will also react to the ongoing liraization by the Erdogan administration. Liraization is a strategy that aims at the de-dollarization of the economy. The government and the central bank have made different policies to promote the use of the lira in the economy. It was launched in December. The policy statement said that:

Still, analysts are skeptical about whether the liraization strategy will work. In a note, analysts at Capital Economics said that the policy showed that the CBRT misdiagnosed the challenge if lira weakness. Instead, the analysts said that the CBRT could solve the lira crisis easily if it embraced the conventional monetary policy. In such a situation, the central bank hikes rates when inflation soars.

The weekly chart shows that the USD/TRY exchange rate has moved sideways recently. It has gone nowhere in the past few weeks and remained slightly above all moving averages. The Relative Strength Index (RSI) remains above the overbought level. Therefore, I suspect that the USD to TRY exchange rate will continue rising in 2023 as the Fed and divergence remain.