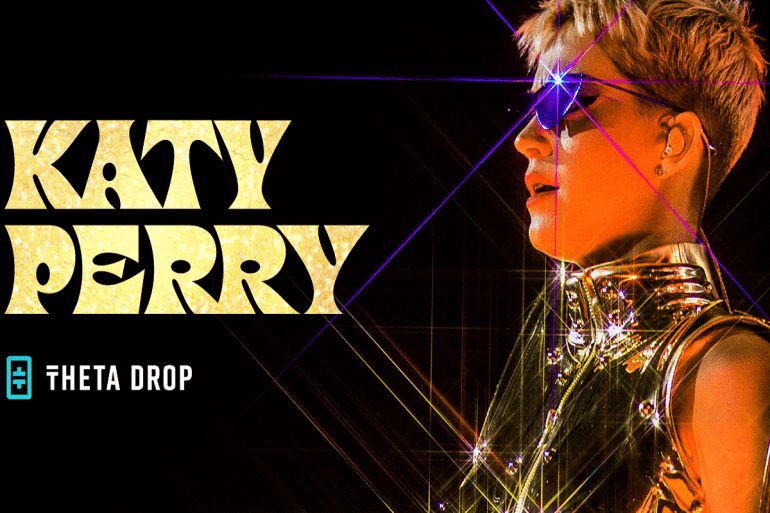 Global pop superstar Katy Perry is releasing her second series of NFTs collections today on Theta Network. The drop will be the second one by her and will be available on Theta Network’s ThetaDrop. The NFTs will feature collectibles from her 2017-2018 “Witness” Tour. The drop will take place on Friday, March 4, at 1 PM PST.

Titled “The Witness Dice Collection”, the drop will also feature two giant golden dices, on which she performed “Roulette” during the tour. Therefore, it goes beyond digital art, giving fans the chance to own a valuable piece of physical memorabilia. Furthermore, NFT holders will get the chance to own exclusive Katy Perry merchandise and nostalgia collections.

Katy Perry’s first drop,” the Roar Package”, raised $1.2 million n primary sales and an additional $860,000 in secondary sales. It attracted over 6,500 unique buyers and sold out in 95 minutes, becoming among the most successful NFT sales on ThetaDrop.

The two golden dice will be availed as one-of-one NFT auctions, similar to the “Golden Lion” prop used in the 2015globally-televised show. The NFT collections are part of the celebration of Katy Perry’s “Play” residency at the Resorts World Las Vegas hotel. She will be performing through the Memorial Day Weekend from May 27 to June 11, 2022, and July 29 to August 13, 2022. High demand has prompted organizers to extend the tour by a few more days.

Mitch Liu, co-founder and CEO of Theta Labs, stated that Katy Perry’s NFT drop was a continuation of ThetaDrop’s commitment to giving its users unique and tangible benefits. “It is no surprise to us that Katy Perry fans reacted so well to our utility and reward-based NFTs”, he added. Today’s NFT drop will be the first of a series of drops by Katy Perry in 2022.

Theta Labs is the company behind proof-of-stake network, Theta Network, Theta Drop, and Theta.tv. ThetaDrop is Theta Network’s platform for creating, buying and selling NFTs, developed in partnership with Katy Perry and World Poker Tour. The Theta Network is optimized for video and entertainment, making it a favorite amongst leading creatives.

Also, the Theta Network is home to Theta.TV, a decentralized live streaming platform built on blockchain. The network has an enviable enterprise and validator governance council, comprising of Google, Samsung, Sony, Blockchain Ventures, Binance, among others.

Notably, Theta Network has cut a niche due to its high transaction speeds and low energy consumption. Due to its energy efficiency, it is among the “greenest” platforms. Furthermore, its gas fees are among the cheapest in the market.

Katy Perry is a global pop icon renowned for chart-topping hits like “Hot and Cold,” “Never Really Over,” “Roar,” “Dark Horse,” among others. Also, she is one of the world’s most successful artists, with more than 48 million albums sold. Additionally, she’s one of only five artists certified by RIAA as having sold more than 100 million digital units.