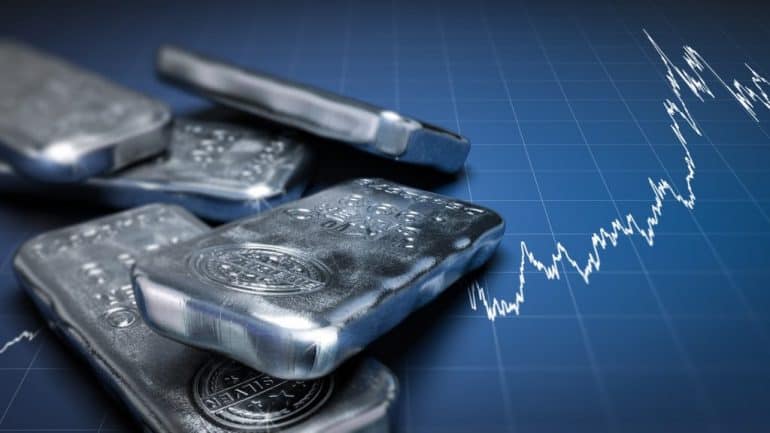 Silver price has plunged past the crucial support zone of $23.50 as higher Treasury yields and a stronger US dollar weigh on precious metals. At the time of writing, the benchmark 10-year US bond yields were at 1.84%. Granted, this is a pullback from Wednesday’s high of 1.88%.

The rising yields have boosted the greenback while exerting pressure on silver and other precious metals. The dollar index, which tracks the value of the US dollar against a basket of six major currencies, is at its highest level in about six weeks at $96.71. Similar to most other commodities, the greenback tends to have an inverse correlation with silver price.

The markets are reacting to the hawkish Fed stance and its assertion of being aggressive in tackling inflation. Analysts expected precious metals to react sparingly to the central bank’s interest rate decision.

The forecast was founded on the argument that real rates would remain negative despite hints of an interest rate hike in March. However, the Fed has poked holes into this narrative after turning more hawkish than expected.

Based on the Fed Chair’s statement, the probable increase of rates during every meeting in coming months cannot be ruled out. Even so, the ongoing geopolitical tensions and inflationary pressures will likely boost silver and other precious metals that act as conventional hedges against inflation.

Silver price has dropped past the support level of 23.50 for the first time in about a week. As a reaction to the Fed interest rate decision, the precious metal dropped by 3.04% after being range-bound for three consecutive sessions. Notably, it is the red for the fifth session in a row.

At the time of writing, it was at 23.24. On a four-hour chart, it is trading below the 25 and 50-day exponential moving averages.

In the immediate term, I expect silver price to find support  at 23.19 as the bulls gather enough momentum to push it back past the critical level of 23.50. Subsequently, it may remain within the horizontal channel of between 23.50 and 24.02 for a while longer. On the flip side, a move below the current support level will have the bears retest the psychological zone of 23.00.