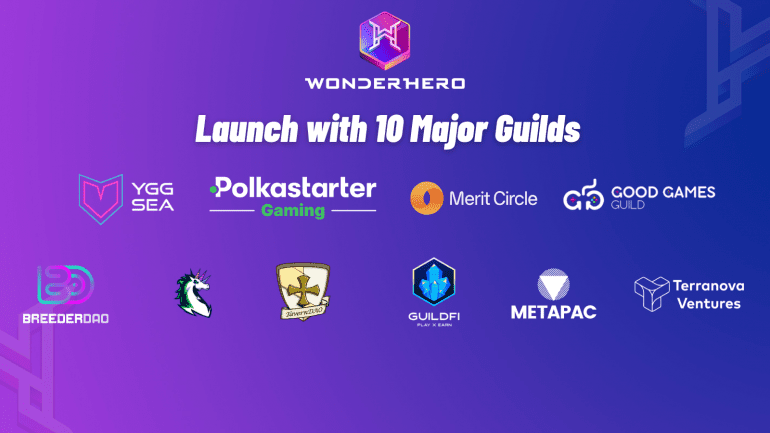 NFT-based RPG gaming platform, WonderHero has announced the launch of its play-to-earn game. The launch, set for January 26th, 2022, is off to a good start, with ten major guilds already on board. The fact that the ten guilds are spread worldwide shows WonderHero’s high growth potential. Following the launch, WonderHero is now ready for a guild race.

The guild versus guild (GvG) gaming concept is a proven mechanism for popularizing games. Therefore, the guild race is a strategic approach by WonderHero. It targets to onboard traditional gamers into GameFi and blockchain.

The interest in WonderHero NFTs is not in doubt. Already, about 2.5 million USDT worth of NFTs has sold. In addition, it recently sold 2,4000 NFTs on its marketplace, generating 120,000 USDT in two weeks. In another instance, it sold 5,000 NFT boxes in 30 seconds.

Launching with 10 Guilds for us is a big achievement and spells the beginning of GvG era, with WonderHero spearheading this frontier”.

With the NFT model promising a sustainable growth trend, more players will likely join in the concept. Using guilds as entry points is also likely to enhance faster growth for WonderHero. Additionally, the earning incentives that come with P2E are a gamer’s magnet.

Launching a game with ten major guilds on board is no mean feat. It signals that WonderHero has got a large footprint and a huge growth prospect. The names and membership distribution of the guilds is as follows:

Founded in 2021, WonderHero is a Role-Playing Game (RPG), where players collect heroes, enter combat and earn tokens. Each hero has unique combat skills and abilities for different combat roles. The game operates on the mobile platform and is available on iOS and Android. It awards players with rare NFTs that they can sell on peer-to-peer marketplaces. Having raised over $1.8 million in funding, WonderHero has grown to hold $4.1 million in total value locked, an all-time high.

The gaming company is led by an experienced team that has led operations in some of the top 20 crypto exchanges. Also, the team members have a long experience in gaming and are gamers by heart.