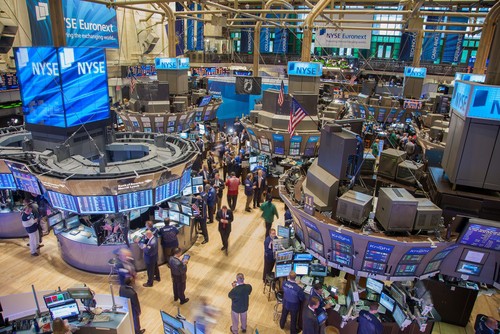 The SP 500 index opened the day sharply lower but has seen some bargain hunting that has allowed it to pare its early losses. Currently, the index is trading flat with a gain of 0.36 points.

Poor earnings forecasts from Netflix put the US markets under pressure. Netflix shares lost 22% in early trading after its market forecast for new subscribers to the end of 2021 did not meet the market expectations. The company is also projecting a downgraded outlook for 2022. Netflix had benefitted from the pandemic as locked-down families relied on the movie streaming service for entertainment. The numbers have dropped off as economies reopened.

As a result, the Communications index and six other subsector indices on the SP 500 fell in early Friday trading.

The intraday decline on the daily chart met support at 4422 and bounced off strongly. This bounce has allowed for a recovery that is now testing the resistance at 4480. A break of this resistance barrier brings 4544 into the picture as a new target. 4600 and 4660 are additional upside targets that become viable with an increasing advance.

On the other hand, rejection at 4480 allows the bears to resume control, forcing a pullback which retests 4422. Only when this support gives way can 4393 and 4368 come into the mix as additional targets to the south.