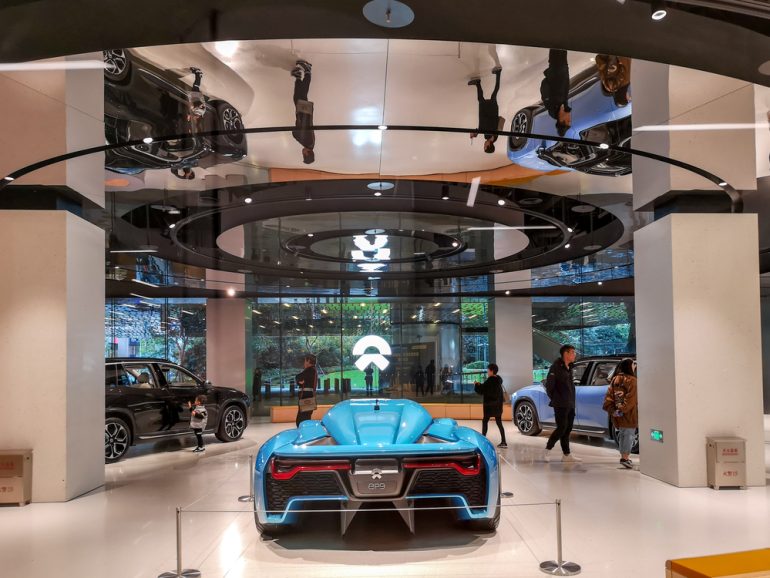 --FILE--A NextEV Nio EP9 electric supercar is on display at the NIO House in Shanghai, China, 16 November 2018. China's Tesla wannabe Nio Inc. said its 2018 vehicle sales totaled 11,348 units, making it the first Chinese electric-car startup to top 10,000 sales in a year. U.S.-listed Nio has partnered with conventional automaker JAC Motors to produce its pure electric model ES8 since 2016. In December, Nio launched its second commercial model, the five-seat ES6 SUV. Nio has been planning to set up its own manufacturing facility. In January 2018, it was reportedly in talks with the Jiading district in Shanghai for a new factory. In September, Nio confirmed a plan for building a Shanghai factory by 2020. However, the plan has apparently fallen under the shadow of Tesla's groundbreaking in Shanghai, where its new factory is set to start production of the Tesla Model 3 by the end of this year.

Global stocks tilted higher on Tuesday as investors waited for the latest American inflation data and central bank decisions. They continued the gains made on Monday despite the rising uncertainty of what the Fed, ECB, and Bank of England (BOE) will say later this week. In the US, Dow Jones futures rose by 125 points while those tied to the S&P 500 and Nasdaq 100 rose by over 50 basis points. Here are the top premarket movers on Tuesday.

Faraday Future stock price continued its comeback on Tuesday. After surging by 62% on Monday, the FFIE share price surged by 17% as investors reacted to optimism that the electric vehicle company will survive. Still, the biggest challenge is that the company is a cash-burning machine that could run out of cash in the coming months.

The challenge for new EV companies is that they lack a national distribution deal, and adequate cash, and they are untested. For example, Rivian stock price crashed recently after the company recalled all its vehicles.

Magenta Therapeutics share price pumped by more than 50% in the premarket session after positive testing of its acute leukemia candidate drug. The firm posted results of its MGTA-117, which it said demonstrates its proof of concept. The drug is an antibody conjugated to an amatin payload. In its testing, the company said that the drug showed greater depletion of target cancer blast cells in participants.

Starry Group share price pumped by 50% despite rising bankruptcy and delisting fears. The stock, which emerged from a SPAC deal, has crashed by almost 100% this year, giving it a market cap of about $16 million. This rise seems like a pump-and-dump scheme or the last kicks of a dying horse.

The ARGO stock price collapsed by more than 25% after it soared by over 4.25% on Monday. The stock crashed as Bitcoin price remained below $20,000. It also plunged after the arrest of Sam Bankman-Fried. While the company said that its liquidity was fine on Monday, investors worry that the company could go bankrupt of BTC continued crashing.

Meanwhile, across the pond in the UK, the top laggards in the FTSE 250 index were companies like Volution Group, Ferrexpo, Rolls-Royce, and EasyJet, which crashed by more than 4%. The main gainers were Ocado Group, Molten Ventures, 888 Holdings, and Prudential.