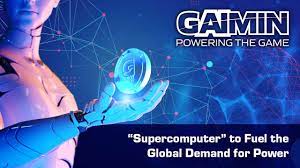 In addition, the platform will be providing a mechanism for gamers to passively generate rewards based on the processing power of their gaming PC.

The GAIMIN platform with Minecraft blockchain and NFT updates will be launched in February. Furthermore, the company plans to list its GMRX tokens before the launch.

Minecraft gamers can access the Minecraft environment through the GAIMIN platform, play Minecraft and passively generate GMRX rewards for in-game use. Its beauty is that it will allow players to use their token earnings within and outside Minecraft.

As part of the development of our gaming platform, we wanted to provide our users with the facility to utilize their rewards within the games they play.”

How the game works

GAIMIN’s “P2E 2.0″ is the next evolution in play to earn. It aims to revolutionize the play-to-earn universe by enabling players to earn even when not playing. The platform utilizes the processing power in a gamers high-performance PC to access GAIMIN’s distributed data processing network. It then generates rewards for the gamer in the form of GAIMIN’s GMRX token.

Players can use the rewards to acquire in-game assets in the form of NFTs from GAIMIN’s marketplace. Alternatively, they may convert them to other crypto or fiat currencies. However, conversion to fiat will only be possible when GMRX is imminently launched on crypto exchanges.

Joseph Turner, GAIMIN’s Chief Gaming Officer, stated, “Minecraft is our first target for blockchain and gaming technology. We have developed our own Metaverse environment for Minecraft fully based on blockchain and NFT technology.”

Founded in 2017, GAIMIN is a gaming company based in the UK and Switzerland. It focuses on helping the gaming community monetize the computational power of their gaming PC.

The company plans to expand its technology to other game ecosystems. It is currently in the process of developing an SDK for developers using the Unreal Game platform. The project will leverage blockchain and NFTs within Unreal games. The aim is to allow the interoperability of NFT assets across different gaming ecosystems. Doing that will ensure that players do not lose their rewards when they change games and can use them in different games.