Carvana Stock Price Has Become a Penny Stock: Will it Recover? 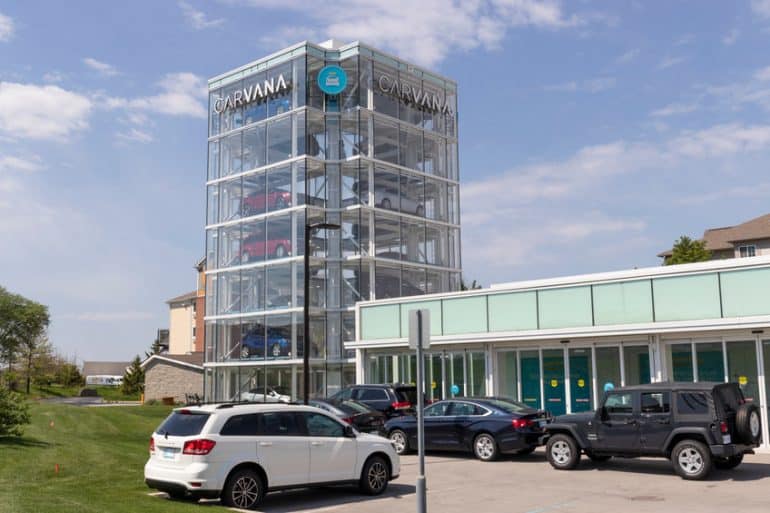 Indianapolis - Circa May 2021: Carvana used car vending machine. Carvana is an online only preowned and used car dealership.

2022 has been a brutal year for growth and unprofitable companies as interest rates rise. Carvana stock price has been among the worst performers this year as its shares has shed over 98% of its value. Its market cap has moved from an all-time high of over $60 billion to just $765 million. It is not alone. Vroom has become a penny stock while Tesla and Mullen Automotive have plunged.

Why Carvana is collapsing

There are several reasons why the Carvana stock price has been in a freefall in 2022. First, after experiencing robust growth during the pandemic, the firm has seen it stabilize this year as interest rates rose. Still, Carvana is the second-biggest used-car seller in the US after CarMax.

Second, Carvana’s acquisition of Adesa, a car auction company added over $3 billion to its debt. With interest rates at an elevated level, the company has struggled substantially. Some analysts believe that Carvana would have been at a better place without the acquisition.

Third, Carvana boosted its inventories earlier this year as used cars remained in high demand. Sadly, the inventory build up happened at a time when interest rates were starting to rise. In other words, the company bought thousands of cars at a peak price and is now forced to sell them at a lower price.

Fourth, Carvana’s business model is more complicated and expensive than people think. For example, it is quite expensive when Carvana buys and transports a car from one state to another. In addition, the company needs to spend money on car inspection and storage costs.

Will Carvana go bankrupt in 2023

Some analysts believe that Carvana will go bankrupt in 2023 as its costs rise. Others expect that the company will need to raise capital by diluting existing shareholders or selling Adesa at a distressed level. Carvana, on its part, has said that it has adequate resources. In its most recent quarter, the firm said that it had over $316 million in cash against $7.4 billion in debt. Carvana also has access to about $4.4 billion in liquidity.

However, the reality is that Carvana is spending about $650 million per quarter in operating expenses, meaning that this liquidity could run out in 7 quarters. With interest rates set to remain high, we could see used and new car prices drop, which will affect Carvana’s inventories.

Therefore, there is a significant risk that Carvana will file for bankruptcy in 2023. The only hope is that the company manages to raise capital by selling of Adesa at a good price.

The stock has moved below all moving averages. Therefore, with the downward momentum persisting, there is a likelihood that the stock will continue falling in 2023. This could see it drop to $2.